Producing your own potatoes can be very rewarding, but requires good preparation!

Choose a variety that fits your end use requirement and if scab has been a problem in your garden area, choose a resistant variety.

When soil is 55-70F. usually early to mid-May in Montana.

Till the soil as deeply as possible to encourage good drainage. Avoid incorporating wood ashes as this will promote the scab disease. Dig a trench approximately 6" deep and place seed pieces in bottom of trench 8-12" apart. If you want larger potatoes, use wider spacing. If you want smaller potatoes or plan to harvest early, 8" is sufficient. Cover seed pieces with 4" of soil. As the potatoes emerge, fill in the rest of the trench.

When the stems are 8" high, gently hill with soil brought from both sides. Hill two more times at two week intervals.

At the second hilling, side-dress with compost, or a small amount of granular fertilizer. Manure can be used, but it often promotes the development of scab.

Keep potatoes evenly moist but not too wet. Maintaining  even  moisture as the tubers form will reduce the development of scab.

Hoeing should take care of emerged weeds. If you suspect a disease problem, contact your County Extension agent.

You should be able to harvest "new potatoes" after ~60-70 days. Dig around the edge of the plant with a fork and see if you can rob a few tubers to determine size. You can dig anytime they are large enough for your use. If you plan on taking the potatoes to maturity and storing them over the winter, reduce water in late summer and let the vines die back naturally or cut the vines. After the vines have been dead 2-3 weeks, often after the first frost, dig potatoes and remove as much of the dirt as possible. Avoid bruising potatoes as bruises are the site for both soft rot and Fusarium dry rot infection. Store in a cool dark place (not in a refrigerator).

Knowing your diseases and pests is the first step in controlling them!

Following are photos and descriptions of some important diseases and insects. If you observe any of these problems, contact your county extension office. 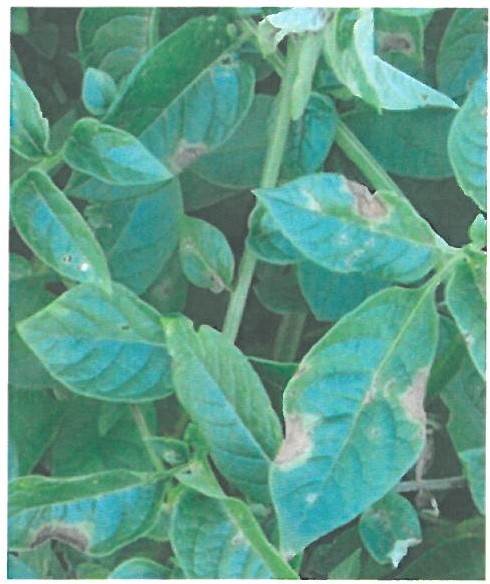 The most destructive disease of potato is Late Blight, which can also infect tomato, eggplant, peppers and petunia. Late blight is favored by cool, wet temperatures. Late blight lesions are light brown surrounded with a light halo. Lesions can advance to decay entire stems. The late blight fungus survives and can be carried in infected potato tubers and can serve as the source of an epidemic. Spores from the fungus may be wind borne and carried 50 miles or more. Therefore, all infected cull potatoes and volunteer potatoes should be destroyed. Please call your County Extension office if you suspect you might have this disease. 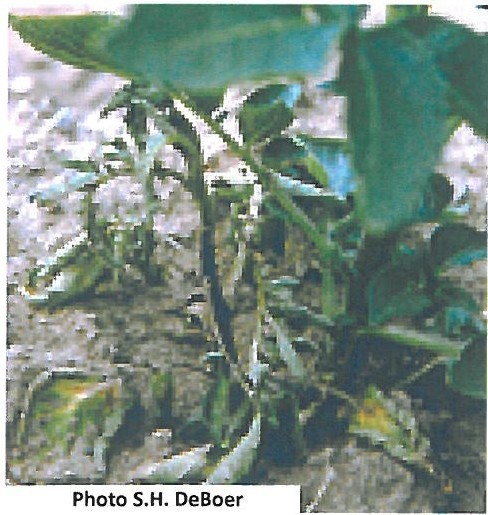 Blackleg starts as an inky black lesion at the base of the stem near the soil surface. The lesion will spread up and down the stem, resulting in rotten tubers.

Symptoms usually originate at a wound on the skin of the tuber. When cut open, the flesh of the tuber will have dried out hollow areas.

Symptoms appear as raised or sunken corky lesions and cracks on the surface of the potato. 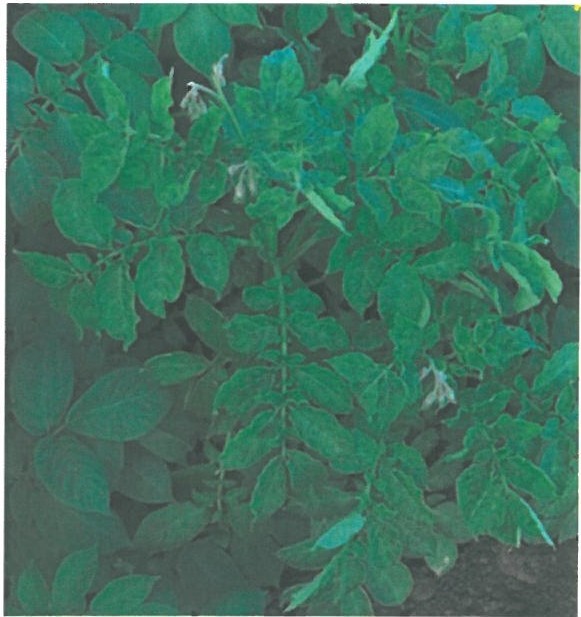 Potato mosaic is spread by aphids, infected tubers and mechanically. Leaves appear mottled and crinkled and may be dwarfed. The disease is transmitted to the tuber and will cause disease in the following years crop.

Bacterial soft rot manifests in tubers that have been wounded mechanically or will often set in as a secondary rot after infection by another tuber pathogen or invasion by an insect. 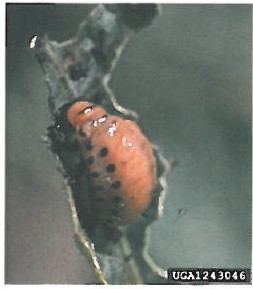 Adults and larve chew potato leaves and can cause total defoliation.

Potato Flea Beetles cause holes in leaves and burrow into tubers.